Running Counter to the Culture

I’m not sure who flipped the switch, but it seems like everything in society is up for redefinition lately.  I’m sure my great-grandmother, a stalwart Christian woman with more compassion and faith than most folks I have run into, would have a hard time listening to the news without trudging down to the local affiliate and attempting to wash out the newscaster’s mouth with soap.

In the increasingly post-Christian culture in which we live, those things our grandparents saw as foundational for our American society are not only brought into question, they are considered suspect.

This however is not new.  It’s happened any number of times in societies throughout history.  The Apostle Paul addressed a similar issue in a letter to the church in Philippi:

Keep track of those you see running this same course, headed for this same goal. There are many out there taking other paths, choosing other goals, and trying to get you to go along with them. I’ve warned you of them many times; sadly, I’m having to do it again. All they want is easy street. They hate Christ’s Cross. But easy street is a dead-end street. Those who live there make their bellies their gods; belches are their praise; all they can think of is their appetites.           Philippians 3:17-19  The Message 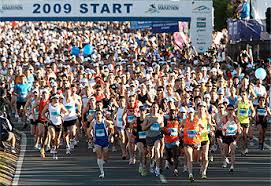 I’m praying that we don’t become even more of a society driven by our appetites than we are already.  I’m disappointed that some in the Church of Christ seem to be moving toward becoming more a reflection of the culture than a shining light to guide it.  For those of us who are running the course, headed for the same goal as the Apostle Paul, the race is a marathon.