California is a water recreation wonderland.  We’ve got the Pacific Ocean, obviously, but that’s only a small part of the aquatic opportunities for amusement in the Golden State.  We also have over 200 major lakes and over 15 times that many smaller named lakes (not counting the ones nobody ever named), and nearly 150 rivers!  And that doesn’t count the 1000 miles of delta waterways in the central valley.  Like I said: a wonderland!

With all that water, the State Board of Education got a bright idea my sophomore year in high school:  They would “Drown proof” every student.  This was accomplished by requiring passage of a “Drown Proof Test” for graduation. 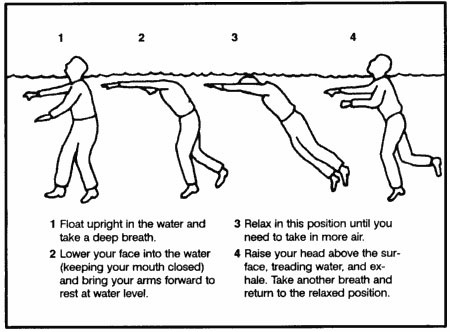 OK, the test went like this:  Each student was thrown into the pool and instructed to do a “Dead Man’s float” which was hanging in the water with your feet down, your arms out to your side and your face in the water (not on your back like anybody can do).  The only body movement allowed was lifting your head to get a breath.  No pass: No graduate.

This test might seem easy enough at first glance.  The problem was that when you take a bunch of 16-year-old jocks, who spent their summer working out, cutting up, and building muscle, and throw them in the pool, they sink.  Not one guy on the basketball, soccer, track, or baseball teams passed the test.  They all sunk to the bottom of the pool  ( I know, I was one of them).  And everyone on the football team flunked too, except for a couple of really large (FAT) linemen.

You see, what the brilliant BOE members failed to learn in school was that muscle is more dense than water, while fat is less.  Therefore, any kid with 15% or less body fat was doomed to fail.

There are some things that just can’t be accomplished.  Paul describes another one here:

It was all laid out beforehand in Scripture that God would set things right with non-Jews by faith.  Scripture anticipated this in the promise to Abraham: “All nations will be blessed in you.”  So those now who live by faith are blessed along with Abraham, who lived by faith—this is no new doctrine!  And that means that anyone who tries to live by his own effort, independent of God, is doomed to failure.  Scripture backs this up: “Utterly cursed is every person who fails to carry out every detail written in the Book of the law.”  The obvious impossibility of carrying out such a moral program should make it plain that no one can sustain a relationship with God that way.  Galatians 3:8-11a  The Message

For hundreds of years, the Hebrew children tried to live up to the standards set in the Old Testament law.   The standard was impossible to reach yet they were told “Utterly cursed is every person who fails to carry out every detail written in the Book of the law” (Deuteronomy 27:26).  Everyone tried, and though a few faked it, everyone failed – even the fat ones.

Then Jesus came along and he made it so that we don’t have to be judged by our performance against the law’s standards.  He told us to live like Abraham:  By faith.

Thankfully it didn’t take The State Board of Education eggheads too long to figure it out that it was hard enough for the iocks with out their stupid test.  Before the end of the year, they cancelled the requirement and the Jocks all graduated . . . well most of them.

The Good news of “The Message” is that those who choose to have faith in Jesus are judged by that faith. And the verdict is in:  We pass the test.

Good thing too.  We were headed strait to the bottom . . .