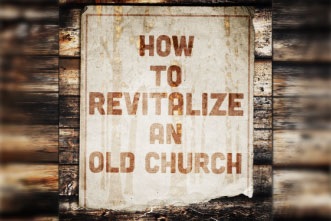 (Interesting insights from a “Senior” minister on what it takes to transition a church filled with senior members into a church that serves all ages.  Most Pastors should read this.  ALL CHURCH MEMBERS should read this.)

Let’s state the obvious here: If we let a church die and go out of business, then bring a new group into the building and start afresh with something different, we have not revitalized anything. We have held a funeral and then birthed a new flock.

And that is often necessary and good.

We’re talking here about taking a dying, dwindling congregation, one that has been on the decline for years and even decades, and turning it around, giving the people new vision and watching God turn it into a strong body of believers.

Most dying congregations are that way for a reason, chief among them being that they are wed to the present way of doing things and are dead-set on not changing a thing.

A young friend will be leaving his church soon to move to another state where he will be taking the pastorate of an older congregation that has been dwindling in numbers. Members who remain are all in their golden years.

The pastor was excited but clear-headed. He knows this can be hard in the best situations and impossible in others. So, wisely, he’s picking the brains of seminary professors and veteran pastors with experience in the business of turning around dying congregations. And, he’s interviewing young ministers who are accomplishing this very thing, wanting to know what they have learned.

As is often the case, his small congregation has invited a larger, dynamic church to adopt them, completely turning over the keys to them, so to speak, which is the only way to achieve this. The big church is the one bringing in my friend to lead the one on life-support. That’s a good sign and shows the weak congregation is serious about wanting to survive and have a strong presence in their community.

For what they are worth, here are a few of my comments to the young minister …

1. The older congregation must want to change.

Anyone who does not like change is going to have trouble with Jesus.

The Christian life is all about change, i.e., growth. See 2 Corinthians 3:18.

I can take you to several dwindling congregations that say they want to grow, and clearly they need an infusion of new members. However, get beneath the surface and you quickly see they want to grow so long as this will not result in any kind of disruption of their patterns. They like things the way they are and resist anything new or different. Such churches are headed to the graveyard just as fast as the hearse can get them there.

In a defining word, the Lord Jesus’ last message in the New Testament includes this line: “Behold, I am making all things new” (Revelation 21:5). He is indeed. He is always at work making things new. His people should beware of being wedded to yesterday’s methods and successes.

2. It’s not that old people dislike change. They just don’t want it suddenly and abruptly, but gradually.

There are no 1948 Packards in the church parking lot. The seniors all drive late-model cars, many own wide-screen televisions and they use the computer.

They can handle change, so long as it’s not abrupt, not forced on them, and they are given time to adjust to it. (The way they got from the ’48 Packard to the late-model Buick was by a series of increments: a 1957 Ford Fairline, a 1968 Chevy Impala and so forth.)

The members of my last church complained when we brought the drum set into the sanctuary. But these days, the instruments accompanying congregational praise include several guitars, a keyboard, digital drums, a violin or two, and a number of wind and brass instruments.

The people have learned to love it.

3. Those who made the decision to invite the big church to take over and “make this work” will need to make follow-up commitments to the change.

One pastor of such a dying congregation told me that two members of the committee bringing him on board soon left the church. One said, “Pastor, I know we said the church needed to make changes, and we meant that. But I didn’t know the changes would affect me personally.”

That’s why it’s not enough for the church to vote to change one time. They must continually own the change going on before them, painful though some of it must be.

Old people especially—I’ll reach 74 my next birthday, so we’re talking about my group!—get used to things the way they are and find adjusting difficult. They have their friends at church, they have known the members of their Sunday School class for years, and most will not automatically welcome newcomers into this mix.

Are these points contradictory, saying that old people do not automatically dislike change and yet they find it difficult sometimes?

4. The pastor is going to need to be patient with them, but not give in to their fears.

We kept the drums in the sanctuary even when some protested. The leadership must listen to the fears of the people, assure them that all is well and stay the course.

I said to the young minister, “You can visit in the neighborhood all week and have a lot of newcomers on Sunday. But the old-timers can freeze them out and they’ll not be back.” So, he will have to constantly lay the burden for hospitality on the members of the church.

They can still stop this revitalization in its tracks by their attitudes.

This young pastor is going to feel caught in a vise at times. The congregation may be balking and resisting the change, yet the mother church (the large church taking ownership of the process) is looking for progress.

The pastor must not wait on the members to take the lead. He must lead them, not follow them. If he falls into the trap of waiting until every member is on board with a change he is proposing, nothing will ever get done.

Pastors must be people of strength and courage, qualities that come from within and from the Lord. (See Joshua 1:6,7,9,18.)

5. If the pastor has ever been a man of prayer, this is the time.

Major change does not happen automatically, easily, naturally or in the flesh. God will do it or it will not happen.

People do not change easily. Jesus said, “No one after drinking old wine prefers the new, for he says, ‘The old is good enough’” (Luke 5:39). Good enough will become the mantra of a lot of your people. The pastor must not let their fears dictate his actions.

I told my friend of the time in the 1970s when my church was transitioning to accepting minority members for the first time. Churches in the deep south had been torn apart by such issues and I was determined not to let this happen.

So, when a young African college student (no, she was not African-American, but from Kenya; led to Christ by our missionaries, even!) indicated God wanted her to join the church, I agreed with her, then stalled for a little time. Over the next couple of weeks, I phoned church leaders asking them to pray that God would do this in His way and for His glory. When the Lord gave us the go-ahead, it was a beautiful and harmonious thing.

You never go wrong waiting on the Lord.

6. The young pastor should keep his network of counselors and turn them into prayer supporters.

Once in a while, he may need to phone one to say, “Here is what’s happening. Tell me what you think.”

He’ll still do what he decides God wants, but receiving the counsel of godly friends is always a good thing.

7. This is all about work. If you are looking for a leisurely existence, you are making a serious mistake.

I pray for my young friend. He and I are not close buddies. I am not his mentor, but merely a neighbor and a veteran servant of God. But my heart goes out to him and I rejoice at his faith.

“Father, bless this son of yours. Go before him, go with him, overshadow him and undergird him and be his rear guard. Do a wonderful thing for the glory of the Lord Jesus through him, I pray. In Jesus’ name. Amen.”

More from Joe McKeever or visit Joe at www.joemckeever.com/mt/